JEFFREY MOSSER (Host, QuasimondoTHREADS) is a champion for ensemble-based new play development. He has trained with Augusto Boal, Liz Lerman, Dell’Arte International School of Physical Theatre, Pig Iron School for Advanced Performance Training, the Center for Performance and Civic Practice, Improv Boston, Dominique Serrand, Giovanni Fusetti, Double Edge Theater, and the inmates from Shakespeare Behind Bars located within a medium-security prison. As Co-Founder of Project: Project Theatre Ensemble, a devising company that blended scripted material with improvisation, he created content for site-specific and non-traditional theatre spaces. He has contributed to new play development at Lookingglass Theatre, Goodman Theatre, Northlight Theatre, Oregon Shakespeare Festival, O’Neill Theater Center, and Actors Theatre of Louisville. He is the host of the From the Ground Up Podcast which interviews Ensembles and Collaboratively Creative companies about their artistic, financial, and social sustainability. MFA Directing, Northwestern University, http://jeffreymosser.me. 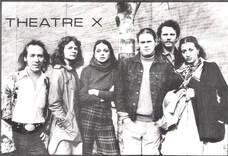 THEATRE X (THREADS Panelists May 19) Formed in 1969 as an informal workshop by a group of UW–Milwaukee faculty and students it became a professional company by 1971, touring throughout the United States and to Europe and Japan. It was named for the algebraic symbol x, which means an unknown quantity, thus implying a theater of unlimited possibility. Much of its early work was created improvisationally as an ensemble, with influences including The Living Theatre and Jerzy Grotowski. The company created over 60 new plays among its 180 productions. Theatre X won a 1978 Obie Award for the set design and lighting design for the New York City production of their original play A Fierce Longing, based on the life of Yukio Mishima. Until its demise in 2004, it was one of the oldest operating experimental theater ensembles in the U.S.

PIG IRON THEATRE COMPANY (THREADS Program May 26)  The mission of Pig Iron Theatre Company of Philadelphia, PA, is to expand what is possible in performance by creating rigorous and unusual ensemble-devised works; by training the next generation of daring, innovative theatre artists; and by consistently asking the hardest questions, both in our art and in its relation to the world around us. Founded in 1995 as an interdisciplinary ensemble, Pig Iron Theatre Company is dedicated to the creation of new and exuberant performance works that defy easy categorization. In 2011, Pig Iron launched a 2-year graduate program in physical and devised theater at a new home in North Philadelphia.  In 2015, the company partnered with University of the Arts to offer both a Graduate Certificate and an MFA in Devised Performance. 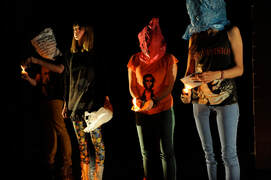 Ontroerend Goed (THREADS Program June 2) ​​ Theatre-performance-group Ontroerend Goed (a punning name, roughly translated as “Feel Estate”) produces self-devised work grounded in the here and now, inviting their audiences to participate as well as observe. They first emerged on the international scene in 2007, with ‘The Smile Off Your Face’, a one-on-one show in which the audience is tied to a wheelchair and then blindfolded. With every new piece of work, Ontroerend Goed provides an intense experience constructed in reality; life goes on during the performance. The company has won numerous prizes across Europe and has hit New York, Sydney, London to critical acclaim. Convinced that every idea deserves its own brand of artistic expression, the company cherishes a sense of ownership for every single contributor to their work, from actors to light designers, scenographers to conceptual thinkers. Ontroerend Goed fabricates possible realities that question how we as individuals position ourselves in the world today. Covering a history of the universe in one evening, turning spectators into voters who eliminate actors, guiding strangers through a labyrinth of mirrors and avatars to meet themselves, the company has made it its trade­mark to be unpredictable in content and form.
View More